Get your all-inclusive Invisalign for $3,495 – No hidden fees.

The same treatment elsewhere? $5500 or more. 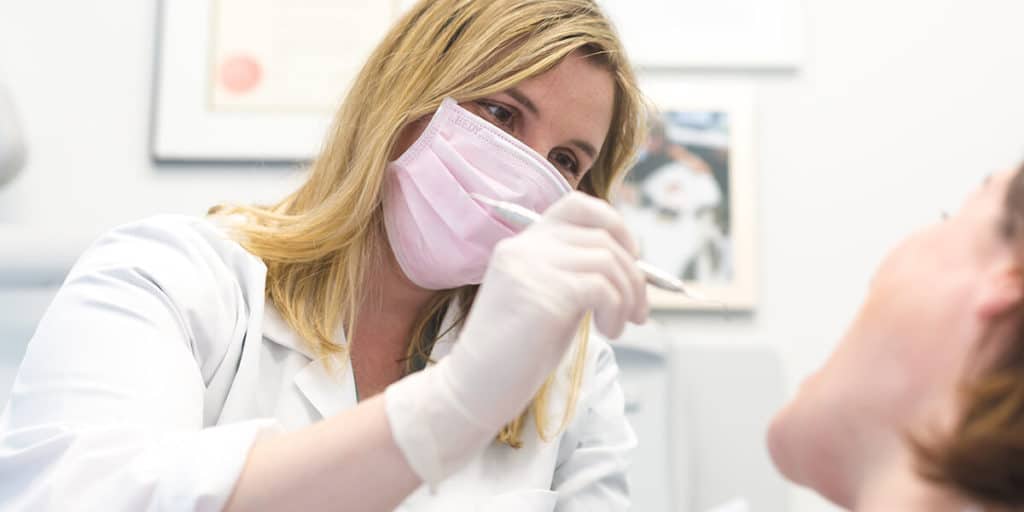 How common is periodontal disease?

Periodontal disease is the leading cause of tooth loss in adults, affecting more than three-fourths of all people, regardless of race, nationality, or socioeconomic levels. In fact, nearly half of all twenty year olds in the world have at least one periodontal pocket. The good news is that the earlier periodontal disease is detected, the more successful are the treatment results.

Whats the big deal if I lose a tooth?

Besides helping us look good, teeth are important for a host of other reasons. For one, strong firm teeth enable us to chew our food more comfortably. Properly masticated food makes for better digestion. Everyone likes a healthy, bright smile. First impressions count. Besides making you look and feel good, teeth help us to speak clearly. People who have had the misfortune of losing all their teeth and wearing dentures, can have difficulty speaking. They also cant eat all the things they want, are often self-conscious about their “choppers,” complain that they cant taste their food as well as they used to, and may even have trouble breathing when they sleep. Those are enough reasons to keep our teeth, and the best way to start is with good oral hygiene.

What is periodontal disease?

Periodontal disease affects the gums and structures that support your teeth. One of the first warning signs that theres a problem is when the rim of the gums next to teeth becomes red and swollen, and bleeds easily when touched. Most often there is no discomfort at this stage, yet the disease has gained a foothold and is now known as “gingivitis.” Gingivitis is reversible with improved oral hygiene techniques and a professional cleaning. Left untreated, however, the danger exists that it will progress into an irreversible periodontal condition – periodontitis – that damages the gums and bone surrounding the teeth.

Periodontitis is a more advanced disease. Bone and tissues supporting the teeth are destroyed, yet still, an individual may be unaware of the problem existing in their mouth. When this occurs, the gum attachment begins separating from the teeth, creating “pockets.” These pockets harbor millions of bacteria trapped in a plaque that sticks to the teeth. Unfortunately for us, the mouth is a perfect incubator. It is warm, dark, and moist, with tons of “food” for the bacteria to metabolize. The net result is that the bacterial plaque thrives and matures.

As mentioned above, bacteria trapped in a film that stick to the teeth – called plaque – initiate the early changes to the gums. As the plaque matures on the teeth, the disease becomes more established to the point where it becomes irreversible. Though nearly three-fourths of the worlds population has some form of periodontal disease, a genetic predisposition is the single biggest determinant as to how serious each case gets. Once periodontal disease is diagnosed, a variety of factors can affect it.

What makes my periodontal condition worse?

Dentists have always known that stress affects the gums. As far back as World War I, the influence of stress was noted in the soldiers fighting in the trenches. Their gums became acutely infected to the point where the tips between the teeth, called papillae, eroded away, leaving disfiguring craters and loss of bone. Teeth became loose, and in severe cases, needed to be removed. This so-called “trench mouth,” has a more formal name: Acute Necrotizing Ulcerative Gingivitis. ANUG is also known as Vincents Disease, and is a stress-related disease.

Hormones also modify periodontal disease. It is commonly known that during pregnancies, some womens gums become swollen and sore, and bleed more easily. On rare occasions, large swellings occur, known as pregnancy tumors. These benign growths may need to be removed if they get in the way of chewing, or become unsightly. When a woman gives birth, most problems reverse themselves, and leave no lasting marks. In some cases, however, pregnant women suffering from periodontal disease may find their condition is actually worse post-partum. Teeth may feel loose or spaces may be present between teeth that werent there before pregnancy. When these symptoms occur, professional help is required.

To a lesser extent, some women notice that their gums get puffy and bleed with the slightest touch right before their menstrual cycle begins. These symptoms disappear a few days after menses has started. Women on hormone replacement therapy can also observe subtle changes in their gums.

About twenty years ago, it was learned that some bacteria implicated as a cause of periodontal disease prefer to metabolize estradiols, rather than carbohydrates. The English translation? Bugs in the mouth cause gum disease to grow fast and furious when bombarded with estradiols. They love to eat the stuff. So what are estradiols?

Estradiols are hormones that circulate in our bloodstream. The three most common are: adrenaline, cortisone, and estrogen. Their amounts increase in our circulation for a variety of reasons, and when they do, provide a fertile environment for the bacteria to multiply and cause periodontal damage.

Its often observed that gums bleed more during pregnancy. Some women sense their gums bleed more just before their menstruation begins. These are two examples of how increased circulating estrogen affects the gums. But there are other conditions that affect men as well as women.

As mentioned before, stress is a main concern. When individuals suffer any sort of personal crisis – job loss, marital problems, a debilitating disease affecting a loved one, or death to a family member – the chances exist that their circulating estradiols will increase. Specifically, adrenaline and cortisone. When this happens in the face of an already existing periodontal condition, chances are the problem will get worse.

Is there anything else that can affect periodontal disease?

Plenty. The worst offender is smoking. Study after study shows that in the face of an established periodontal condition, smokers have worse gums. Not only do they have deeper pockets and more bone loss, but they dont heal as well as non-smokers do. This is especially germane when periodontists and oral surgeons place dental implants in smokers. Smokers can successfully have implants, but they tend to heal slowly, have more infections, and experience more problems with their implants.

To a lesser extent, what we eat and the vitamins we take, affect the gums. Individuals who are overweight, those consuming high amounts of carbohydrates – especially in candies, cakes and sugared drinks – adversely affect their teeth and gums. Constant sucking on cough drops and hard candies help the bacteria metabolize more quickly, and in greater numbers. This causes a greater risk for dental decay and more inflamed gums.

On the vitamin front, if an individual has anywhere near a healthy diet, then the gums will not be affected. Periodontal disease is not affected by Vitamin C or calcium supplements, and taking these supplements will have no affect on gum disease.

Lastly, many disease states affect the gums. The most notable is diabetes. Diabetics need to take good care of their teeth and gums because they are prone to more infections and greater problems than non-diabetics.

Medications affect the gums. One drug group that concerns periodontists is the calcium channel-blockers. These medicines – Cardizem, Procardia, Verapimil, plus others – are used to treat certain heart conditions. Though they dont affect every person the same way, and in fact, dont affect all who take them, calcium channel-blockers sometimes cause the gums to swell. These gum swellings occur between the teeth, and make brushing and flossing difficult. In some instances, the gums swell so large they can only be managed with surgery. If you take drugs in this category and are experiencing swollen and bleeding gums, you may want to seek professional help.

Be aware of a common side effect to many medications: dry mouth. When the salivary flow decreases, better oral hygiene is needed since decay and inflammation may increase. If you sense your mouth is dry, clean your mouth frequently, and swish often with water.

What are the signs of gum disease?

There are many signs of gum disease.

Gums bleeding when brushing the teeth
Red and swollen gums. Tender gums
Gums pulling away from the teeth, exposing roots and creating recessions
Pus between teeth and gums. Sudden swellings that are painful to the touch
Loose teeth, or spaces suddenly appearing between teeth
Teeth beginning to flare out
A change in the way your teeth fit together/a different bite
It is important to note you may have periodontal disease and not experience any of these symptoms. Periodontal disease is silent and chronic, rarely giving an advanced warning that tissue destruction is taking place. Thats why it is important to have regular dental checkups.

How is gum disease diagnosed?

During an exam, the dentist or hygienist inspects the color and firmness of the gums. Teeth are tested for looseness. The bite is checked. At some point, a small measuring instrument – actually its a millimeter ruler – is gently inserted between the tooth and gum to measure the depth of the pockets. If the depths are greater than the norm of 1-3 millimeters, improved oral hygiene measures and more deliberate therapy may be suggested. This “periodontal” exam should be done at frequent intervals for all adults, especially when there is a history of periodontal disease in the immediate family (like a parent needing dentures by age forty).

X-rays should be taken at appropriate times to evaluate changes in the bone supporting the teeth. X-rays also reveal dental decay and can be useful in detecting a variety of abnormalities.

How can gum disease be prevented?

You are an integral player on the team charged with caring for your teeth. Without your steady involvement, the hygienist and dentist/periodontist are fighting an uphill battle. When a patient asks how frequently they really have to floss, its been answered somewhat tongue n cheek, “Floss only the days you want to keep them!”

Regular dental visits are essential to good dental health. In spite of daily oral hygiene measures, calculus (tartar) forms anyway. A professional cleaning by a dentist or hygienist will remove the hardened calculus off the teeth. Why bother if it only forms again? Because calculus acts much the way coral reefs do. It serves as a hiding place, with all its microscopic nooks and crannies, for the millions of bacteria hovering about the teeth. Remove the tartar, and flossing and brushing will be that much more effective in removing plaque.

Once my gums have been treated, am I finished with periodontists forever?

Not in most cases. As mentioned earlier, periodontal disease is a chronic condition that is not cured but can be stabilized and maintained. Periodontists have a great track record when it comes to getting periodontal conditions under control. Once the initial treatment has been completed, maintenance care is essential for future good oral health.

Periodontal disease often follows certain patterns. Pockets and bone loss usually begin in the maxillary (upper) molars, followed by the mandibular (lower) molars. In time, it will involve other teeth, as well. Once formed, periodontal pockets do not get worse on a daily basis. Rather, pockets can remain stagnant for long periods of time, only to have short bursts of problems when they worsen, only to become stabilized again. We call this periodontal breakdown “episodic.” Along the way, abscesses can occur, and pockets and bone loss can progress to the point that teeth need to be removed. Treatment retards and, in many instances, can even stop this progressive gum/bone deterioration.

Who should get their gums checked?

Everyone would benefit from having a periodontal examination. Make certain your dentist or hygienist checks your pockets the next time you get your teeth cleaned. Its to your advantage to have subtle changes picked-up before they become serious. Come and visit our practice for a consultation to find out the best way to take to care of your smile!

Did Not Find The Answers You Were Looking For?

The latest dental deals and tips.